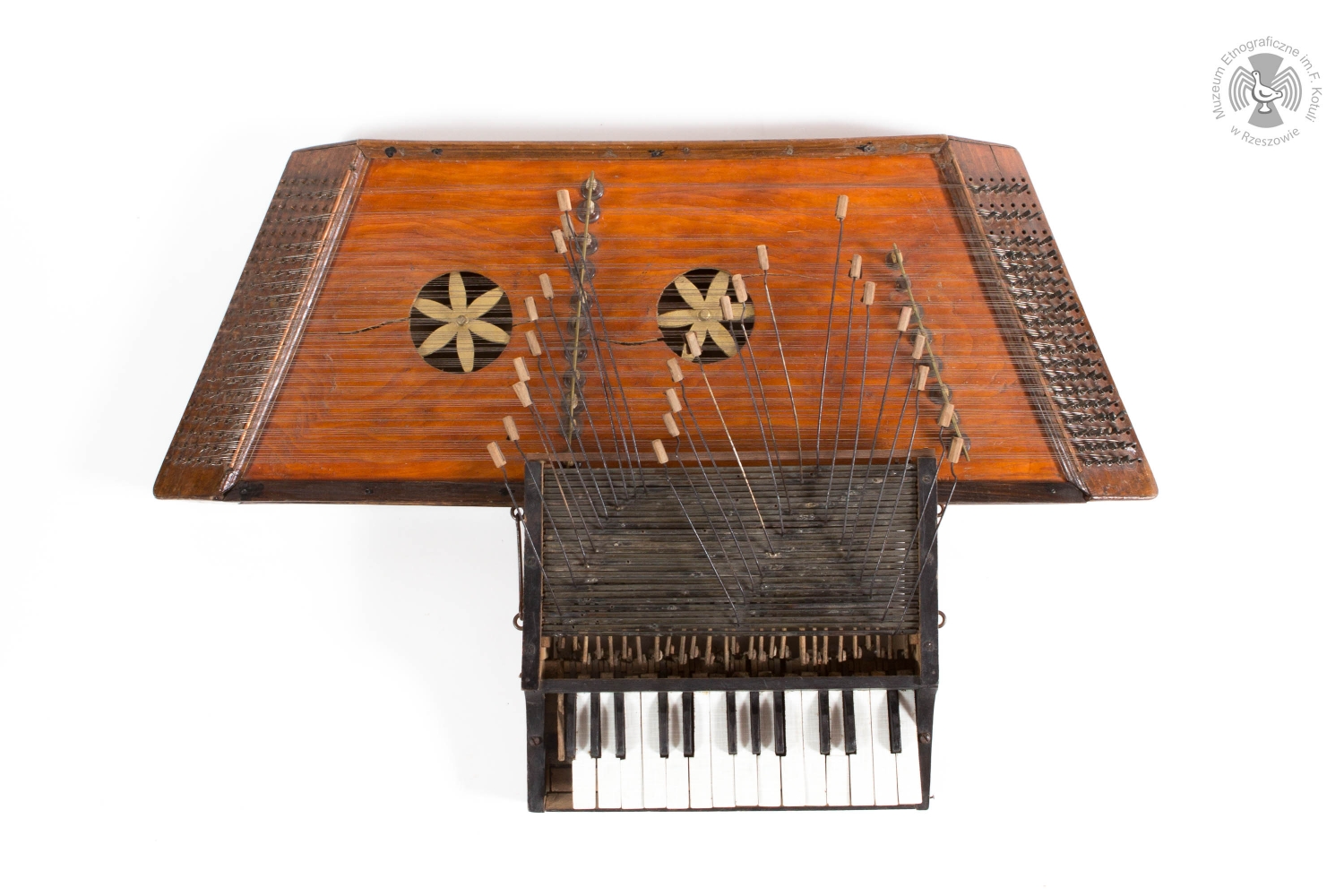 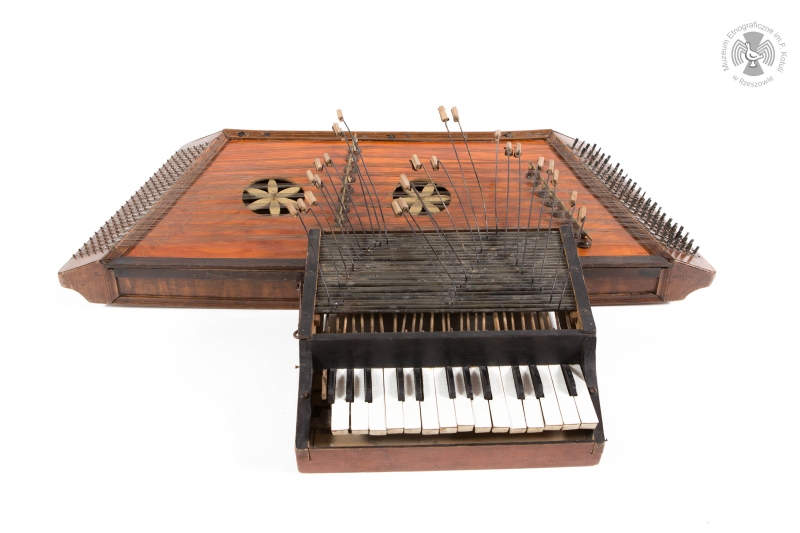 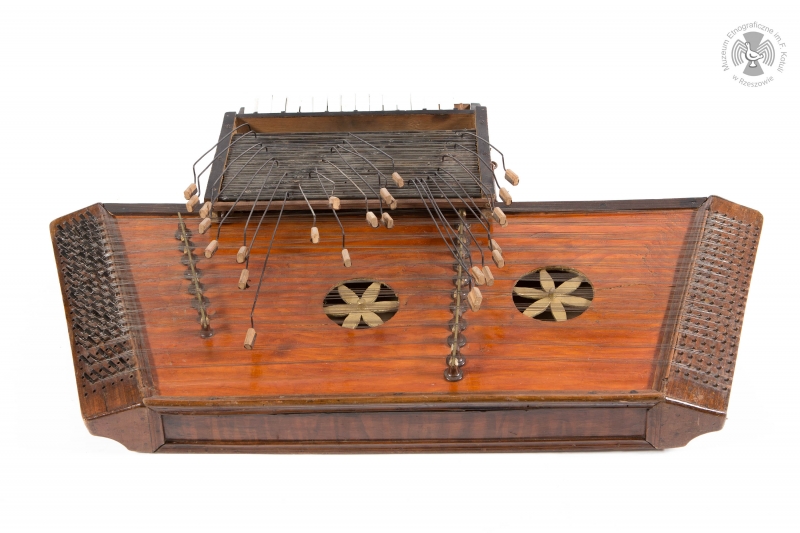 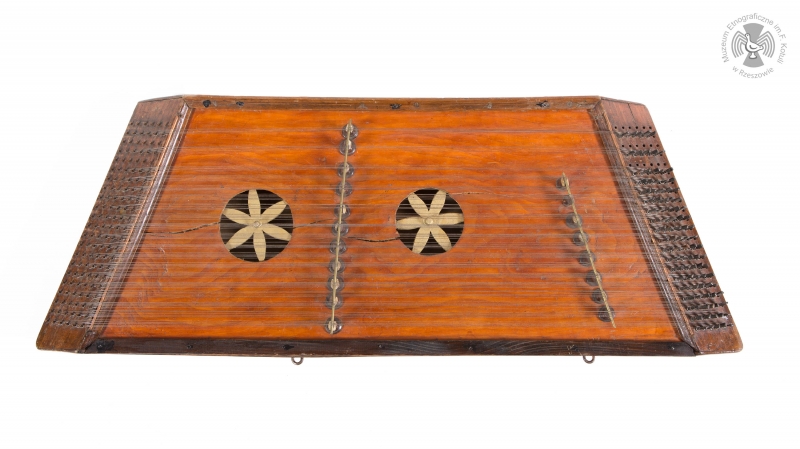 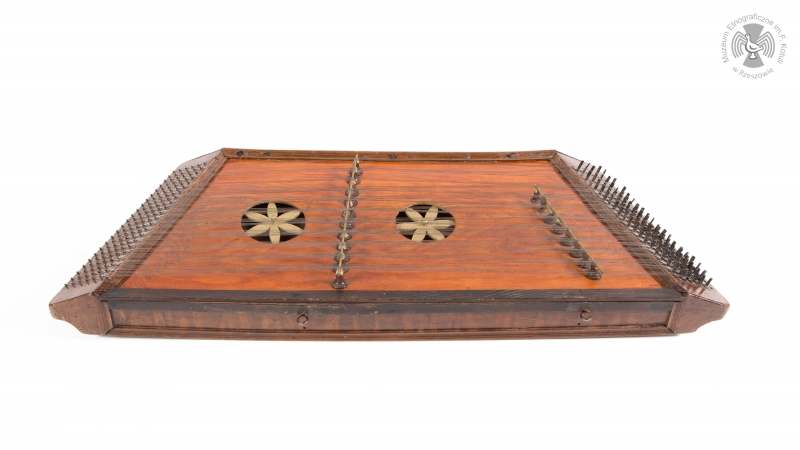 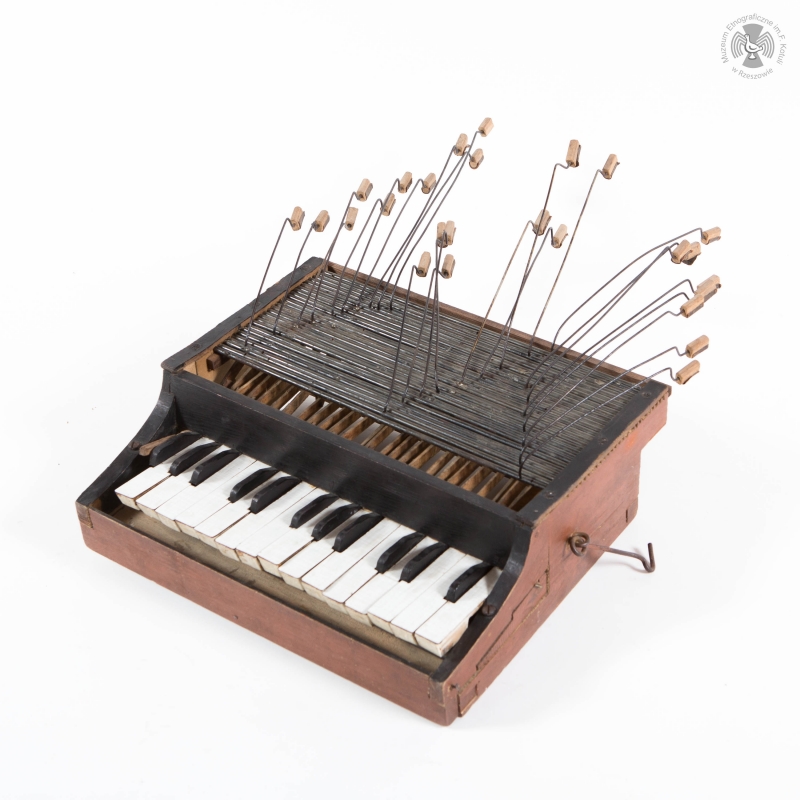 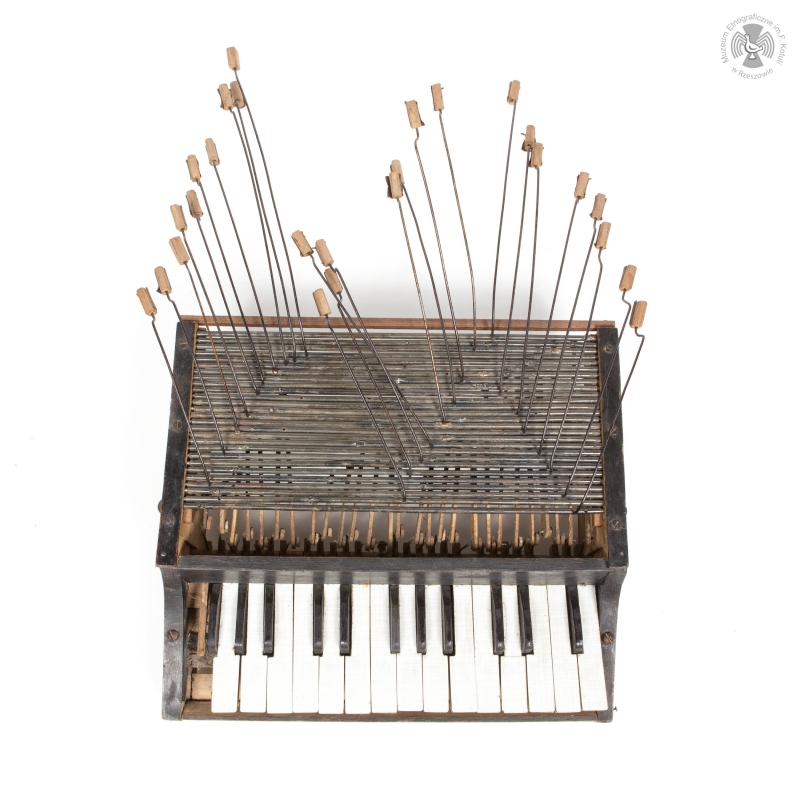 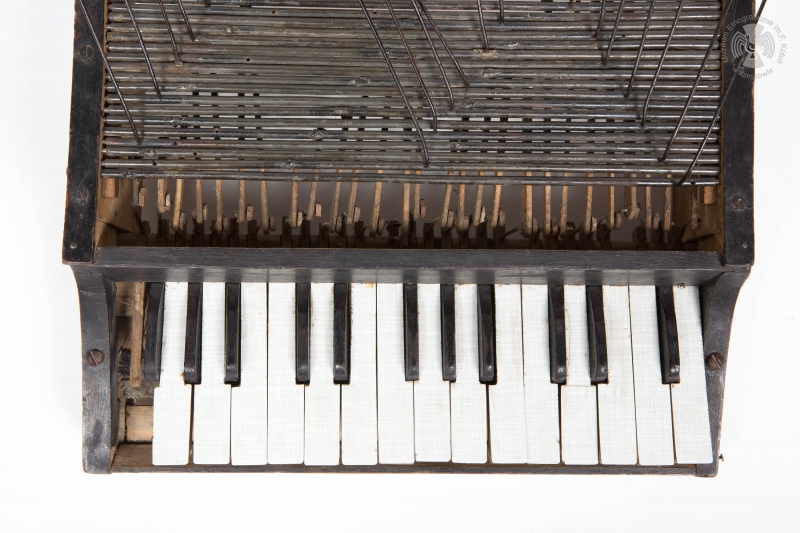 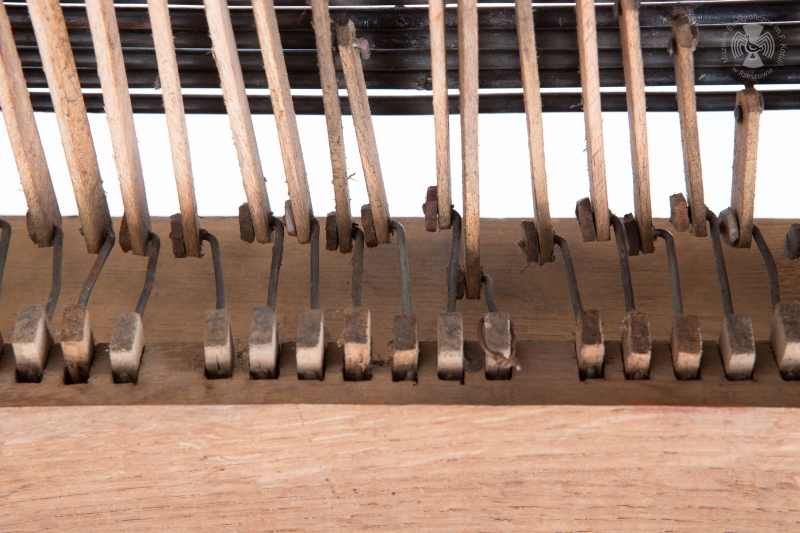 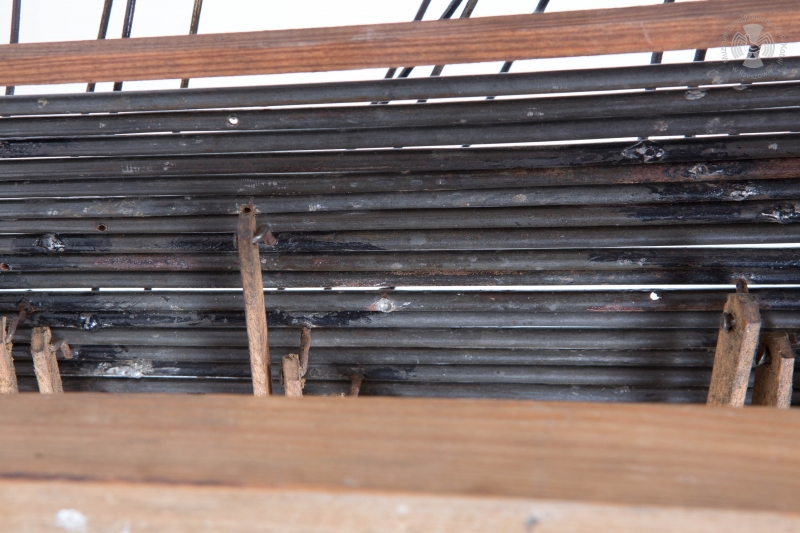 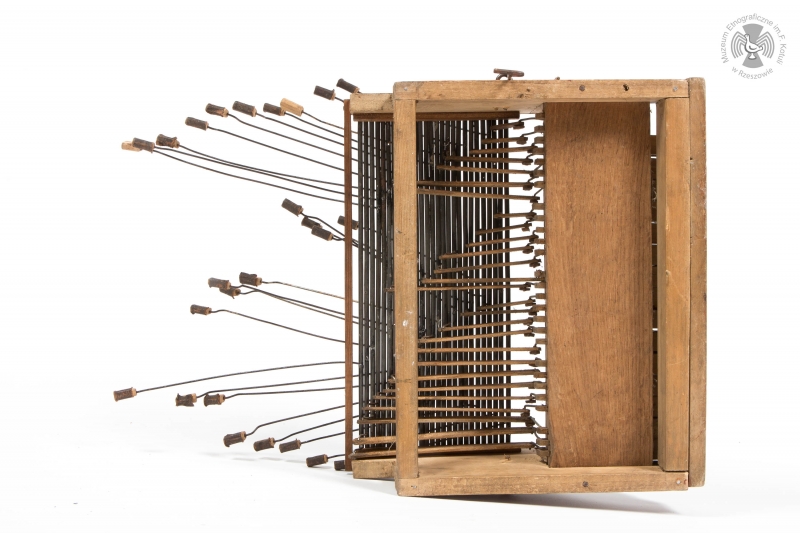 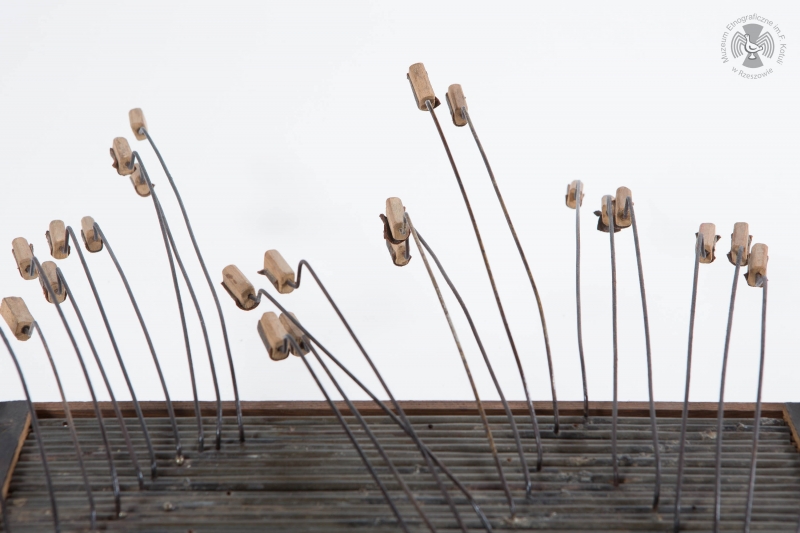 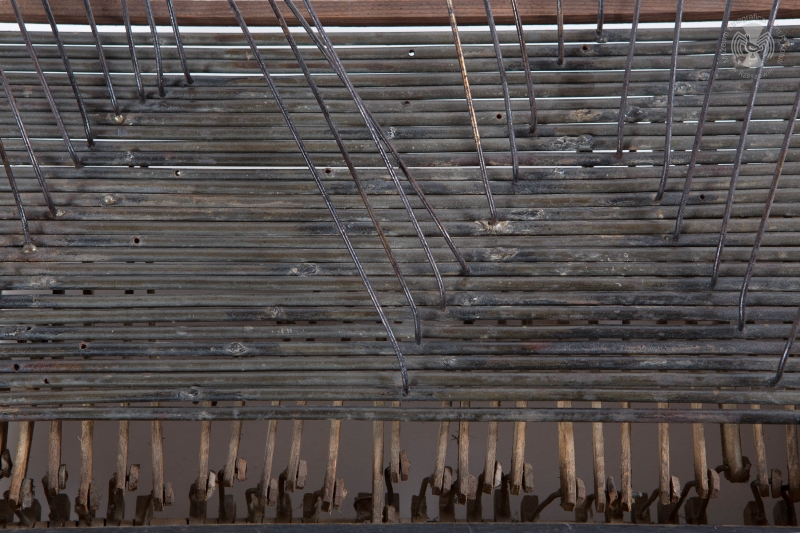 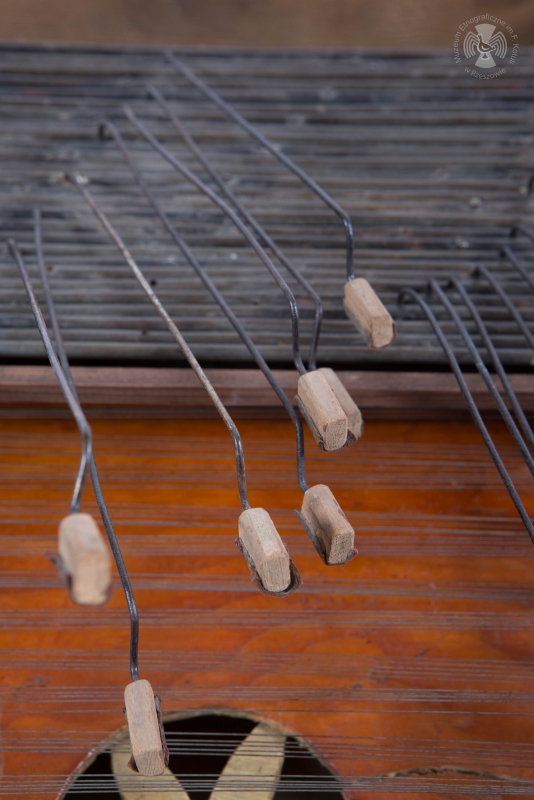 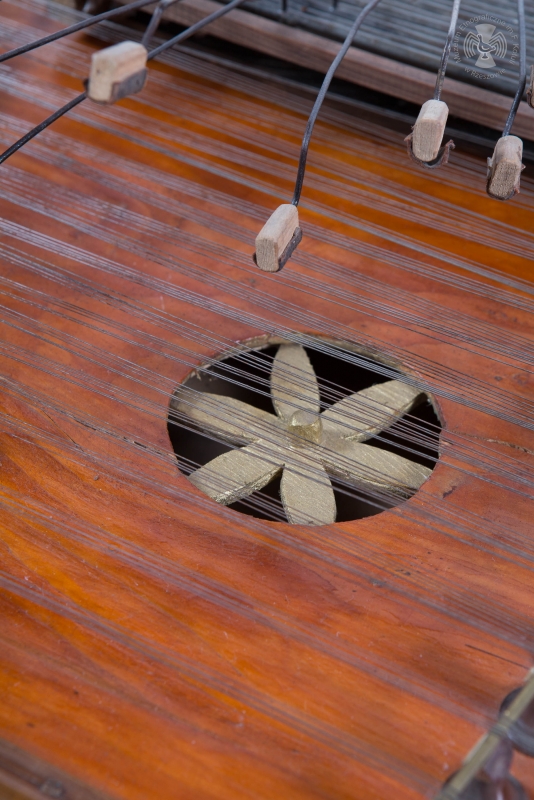 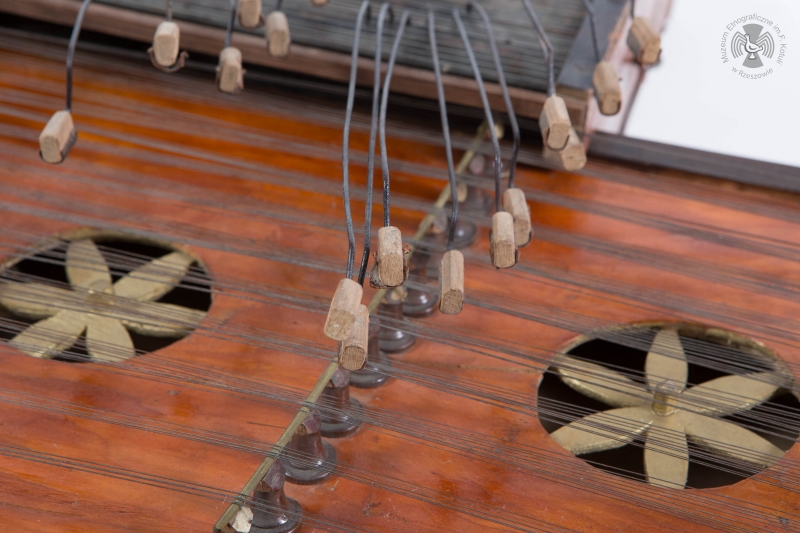 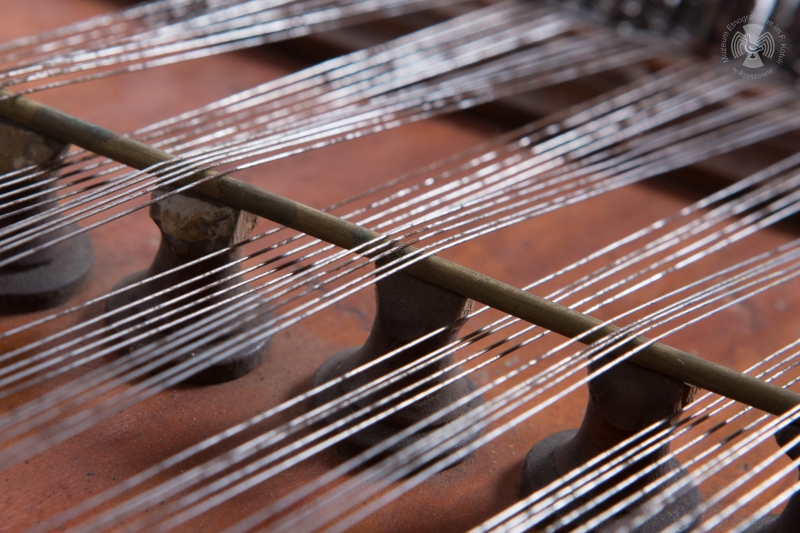 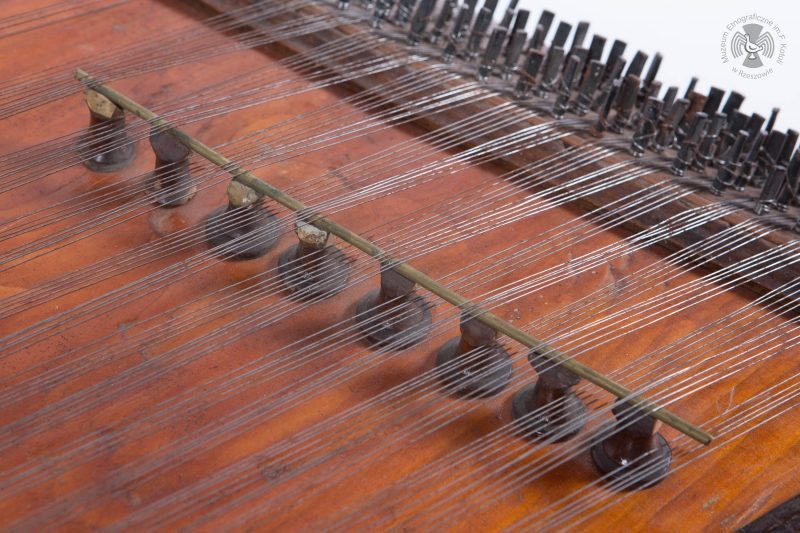 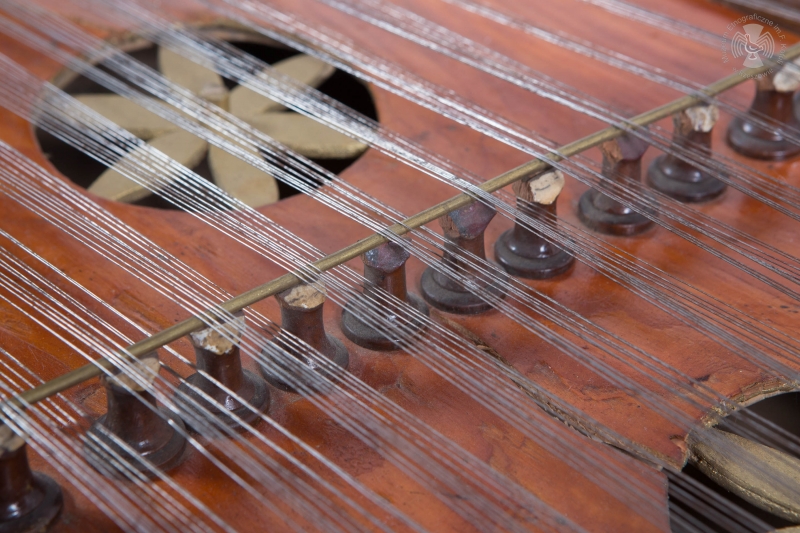 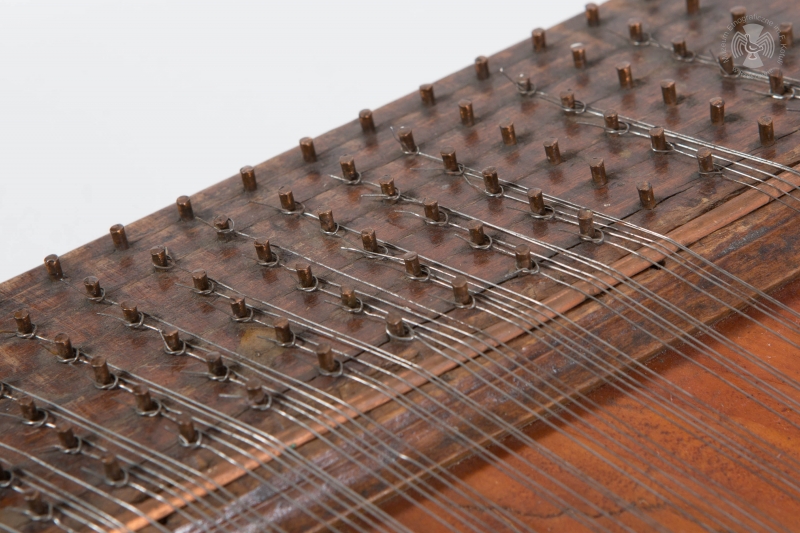 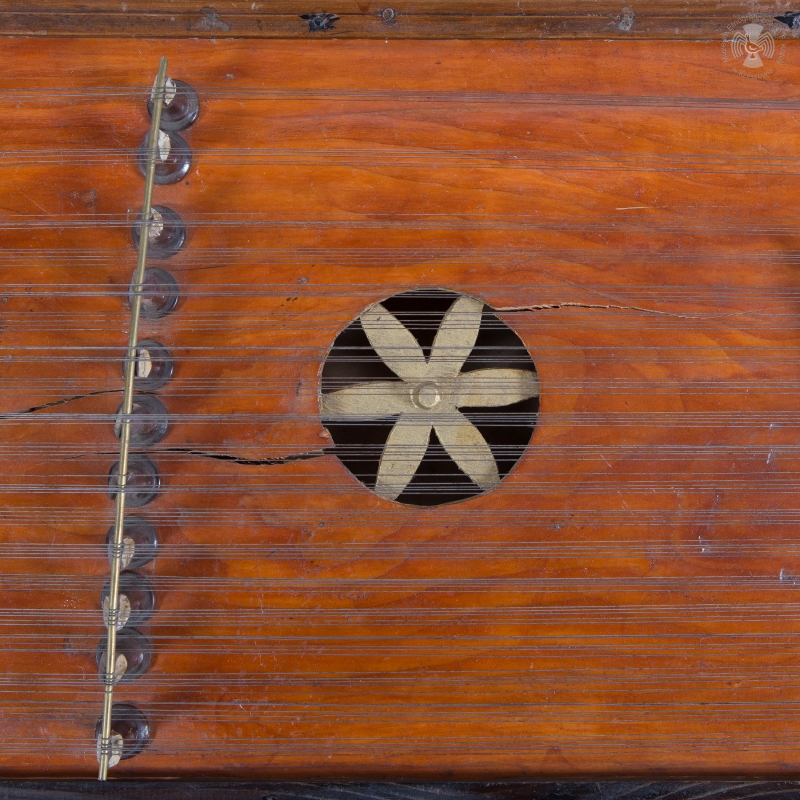 Classification: 3 Chordophones / 31 Simple chordophones or zithers / 314 Board zithers / 314.1 True board zithers / 314.12 With resonator / 314.122 With resonator box (box zither) / 314.122-4 True board zithers with resonator box (box zither) sounded by hammers or beaters / 314.122-4-8 With keyboard
Maker: Babiarz Jan
Date: 20th century
Village / Town: Gwoźnica Górna
Region: Subcarpathia
Country: Poland
Owner: Franciszek Kotula Ethnographic Museum in Rzeszów
Inventory number: MRE 8319
Description: Maker unknown; body in a trapezoid shape; top plate and bottom plate monolithic; two round resonance holes on the top plate (each 90 mm in diameter); the front and back of the resonance box upholstered with decorative, moulded wooden battens; 22 string courses: originally 6 strings in each course) stretched between metal hitches and pegs (for tuning), supported by two rows of single bridges (of various length – the right row is shorter), each bridge with a metal bar on top; melody strings stretched interchangeably with bass strings; melodic strings divided by bridges in a 2:3 ratio, due to which their left sections are pitched a fifth higher than their right sections; undivided bass strings; two hitches on the sides of the instrument for attaching a strap which allowed the musician to suspend the dulcimer on their neck while playing in a standing position; two wheels in front to attach a keyboard box; the keyboard box is made of wood, rectangular, primitive, made of different kinds of wood, with a row of white (15) and black (11) keys – arranged as in a piano; the keys are attached to the hammering mechanism using a lever; hammers (26) fastened individually to metal bars, each bar lifted by pressing a key (from the bottom, via the lever) sets the hammer in motion; the hammers are made of crooked wire of appropriate length, with wooden blocks attached at the end, each supplied with a piece of leather glued to the bottom; metal hooks on both sides of the keyboard box, used for attaching the box to the dulcimer; the sound is produced by pressing the keys, which make the hammers hit the strings; the system was likely constructed by dulcimer player Jan Babiarz, who lost a few fingers and was thus prohibited from playing the dulcimer in a traditional manner, using mallets; the keyboard system may have enabled him (at least partially) to play the instrument; two wooden mallets attached to the instrument
Decoration: body painted dark bronze; front plate coated with bronze paint; resonance holes filed with rosettes shaped in the form of a flower head with 6 leaves, painted gold
Measurements: 930 x 690 x 335 x 80 mm; box: 365 x 320 x 105 mm
Materials: wood, metal
Sound compass, tuning: variable, usually the lowest tone G – d, scale: from two (sometimes incomplete) to over four octaves
Performance practice: formerly an instrument of Jewish and Romany musicians, later folk musicians; it was played solo or in bands, particularly in the Vilnius area, Rzeszów area, and in Subcarpathia, where the dulcimer became the musical hallmark of the region after World War II; dulcimers from the eastern part of Lesser Poland are usually bigger and louder than those from the Vilnius area
Catalog card by: Jolanta Pękacz / Zbigniew J. Przerembski