Characteristic for the region of Podlachia (Podlaskie), just as in the neighbouring Kurpie, the area of Suwałki, and Lubelskie Province, was increased significance of singing and relatively weaker position of instrumental music, which, as it seems, developed in the region relatively late (i.e. in the second half of the 19th century), and thus incorporated many features of popular urban music. Nor did it develop a specific regional style, being influenced by the neighbouring Mazovia. The folk repertoire of Podlacha had associations with minor gentry culture, as the region abounded in impoverished, backwater gentry. A Podlachia band would consist of the violin, a single-skin drum, and starting from the 1930s also the Polish accordion (the hand or pedal variety). Sometimes used was also a large double-skin drum. After World War II, dulcimer players relocated from the Vilnius area arrived in the north of Podlachia (just as in the neighbouring Varmia and Masuria, as well as the area of Suwałki). Different kinds of pipes, as well as wooden trumpets and horns (known as ligawki, among other names) were used by shepherds, but from the 19th century on they would also be played around villages during the Advent. The region's traditional instrumental practice has survived to our times in a very limited form. Thanks to courses held by the Museum of Agriculture in Ciechanowiec and the Municipal and Rural Culture Centre in Łochów, the practice of playing wooden folk horns has been revived and is now cultivated. 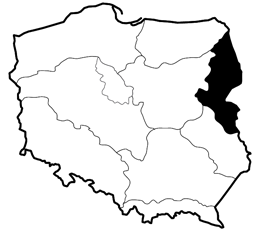 A Song in Expectation of Approaching Easter, sung during Lent; The vocal ensemble from Dołhobrody; rec. Kazimierz 1996; Sources of Polish Folk Music

A Polka; The band from Płonka Kościelna: Jan Płoński (b. 1930), pedal accordion, Czesław Perkowski (b. 1919), drum; rec. Kazimierz 1992; Sources of Polish Folk Music
© Instytut Muzyki i Tańca
The texts, photos, films, translations and other contents of the site
are protected by copyright laws. Their use or reproduction, even partial, is prohibited without previous approval from the Institute of Music and Dance.