Kolberg (1867): "The Kujavians have their own separate songs and dances, just as they have their exclusive dress and dialect, but it should not be supposed that this distinctness departs too far from the general stamp and expression of the Polish music peculiar to Greater Poland and Mazovia. […] Here, the richness of the soil and the environment has a natural impact on the richness of the attire and the richness of the singing, although those blessed gifts are sometimes layered atop one another in thick and insufficiently coherent layers. That abundance, penetrating all the secrets of Kujavian life, also reaches into its musical predilection. […] In many melodies, one may discern a fondness or cherishing of certain tones […] to which the musician continually returns as if in obeisance, gladly adhering to them, and his bow ultimately hangs on them endlessly, even if they be the sound of the tumult, indisposition, battles or sufferings of his soul, when he cannot stifle them. Man’s inner cord, once touched, once set in motion, is not easily hushed, but continues to sound and to sound, constrained by his emotions. So you want the musician to finish? Ha! Not likely. Chattering serves him well! If he stops for a moment, for today, then he’ll carry on tomorrow, and if not… then come the day after, in a week. But don’t expect to hear the end from him, because he won’t tell it to you. Yes, and no doubt nobody else will either. After all, the great Composer of the world himself merely keeps human life in suspension on this mortal coil; man is buffeted between joy and woe, hangs on the dominant as if on a rope and will only learn of the solution, of the perfect conclusion… somewhere… beyond the grave".

Kolberg (1867): "The violin is very often accompanied by a maryna, or bass, the two open strings of which rumble to the beat, not always adhering strictly to the pitch set for it by the violin. In former times, one would also see the bagpipes and dulcimer, now obsolete; the latter does still appear, although rarely, only at Jewish weddings. Nowadays, the violin is accompanied by cello, oboe, clarinet, flute, trumpet, drum and so on, now all together, now several at a time, now separately".

Kuyavian instrumental music mainly derives from vocal music, although the region's repertoire is not devoid of purely instrumental pieces with a characteristically complex structure made up of a few parts and rich ornaments.

A typical folk band of Kuyavia (or Kujawy) would be composed of the violin, small or big double bass called maryna (Marina) or tłusta maryna (Fat Marina), and sometimes a single-skin drum. Earlier, the region's musicians also had played bagpipes and the hammered dulcimer. Traditionally, only open strings of basses were played, providing rhythmizised drone for accompaniment. Bands with this line-up could be seen in Kuyavia until the mid-20th century. Yet it is possible, as noted by Oskar Kolberg, that already around a hundred years earlier Kuyavia bands could have also included the flute, clarinet, oboe, or trumpet. In the first half of the 20th century Kuyavian bands saw the arrival of the Polish accordion, accordion, and saxophone. Shepherds would play different pipes (usually made of willow bark in the spring). Earlier they had used wooden horns and trumpets called bazuna as signal instruments to produce shepherd calls, some of which featured agogic alternations (slow-fast). 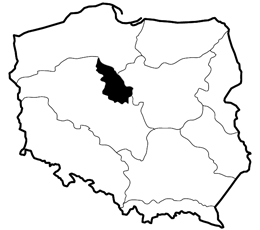 Janusz Prusinowski, violin, vocal, Piotr Zgorzelski, double bass; rec. All the World's Mazurkas, Warsaw 2014; IMIT
© Narodowy Instytut Muzyki i Tańca
The texts, photos, films, translations and other contents of the site
are protected by copyright laws. Their use or reproduction, even partial, is prohibited without previous approval from the National Institute of Music and Dance.