As for Silesia (Śląsk), Polish folklore was present mainly in Upper Silesia (Górny Śląsk), including the areas of Opole and Cieszyn, and in north-eastern parts of Lower Silesia (Dolny Śląsk). Instrumental music was of relatively higher significance there, including pieces not deriving from vocal music, dance music of German or Austrian origin (e.g. szpacyr-polka, lendler, or tyrol), and some dance games, along with popular melodies: fashionable tangos or foxtrots.

Silesian folk bands' traditional string line-ups (violin and basses) have mostly not survived to our times. Already in the second half of the 19th century a Silesian band would include the first and second violins, the clarinet, the cornet or trumpet, the double bass, sometimes also the flute and the trombone. Wind orchestras were also becoming more and more popular, embracing trumpets, cornets, saxophones, and tubas, which would be joined by clarinets and a double-skin drum (or even a full-fledged percussion set). Wind orchestras were particularly characteristic of the areas of Cieszyn, Opole, and Upper Silesia, where they were (and some still are) affiliated with mines. Miners also played instruments untraditional for Poland: the guitar, mandolin, zither, button accordion, and "table" accordion (harmonia stoliczkowa).

Silesian bands also used to include the hammered dulcimer, and earlier probably bagpipes as well. The devil's fiddle was not unknown in the region, being especially popular in the area of Opole, but also seen in Lower Silesia, similarly as the Jew's harp, which was popular mainly in the area of Cieszyn, and called bramble or brombla. 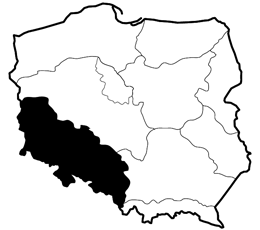 A processional wedding march; The brass band from Smolarnia: Franciszek Uliczka (b. 1905), trumpet, Józef Janik (b. 1901), trumpet, Józef Teodor (b. 1906), trumpet, Rudolf Gąsior (b. 1960), drum; rec. Płock 1977; Sources of Polish Folk Music
© Instytut Muzyki i Tańca
The texts, photos, films, translations and other contents of the site
are protected by copyright laws. Their use or reproduction, even partial, is prohibited without previous approval from the Institute of Music and Dance.