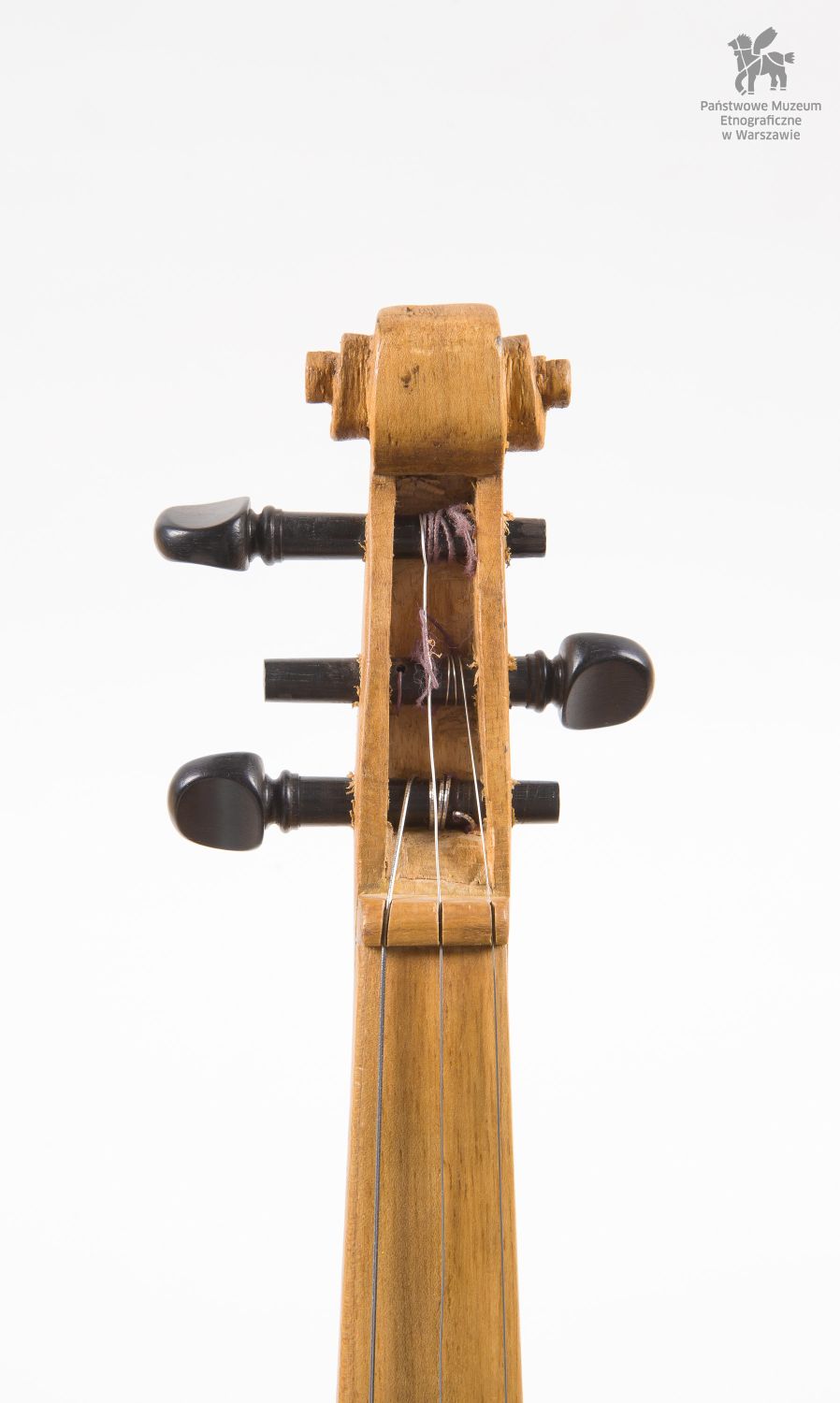 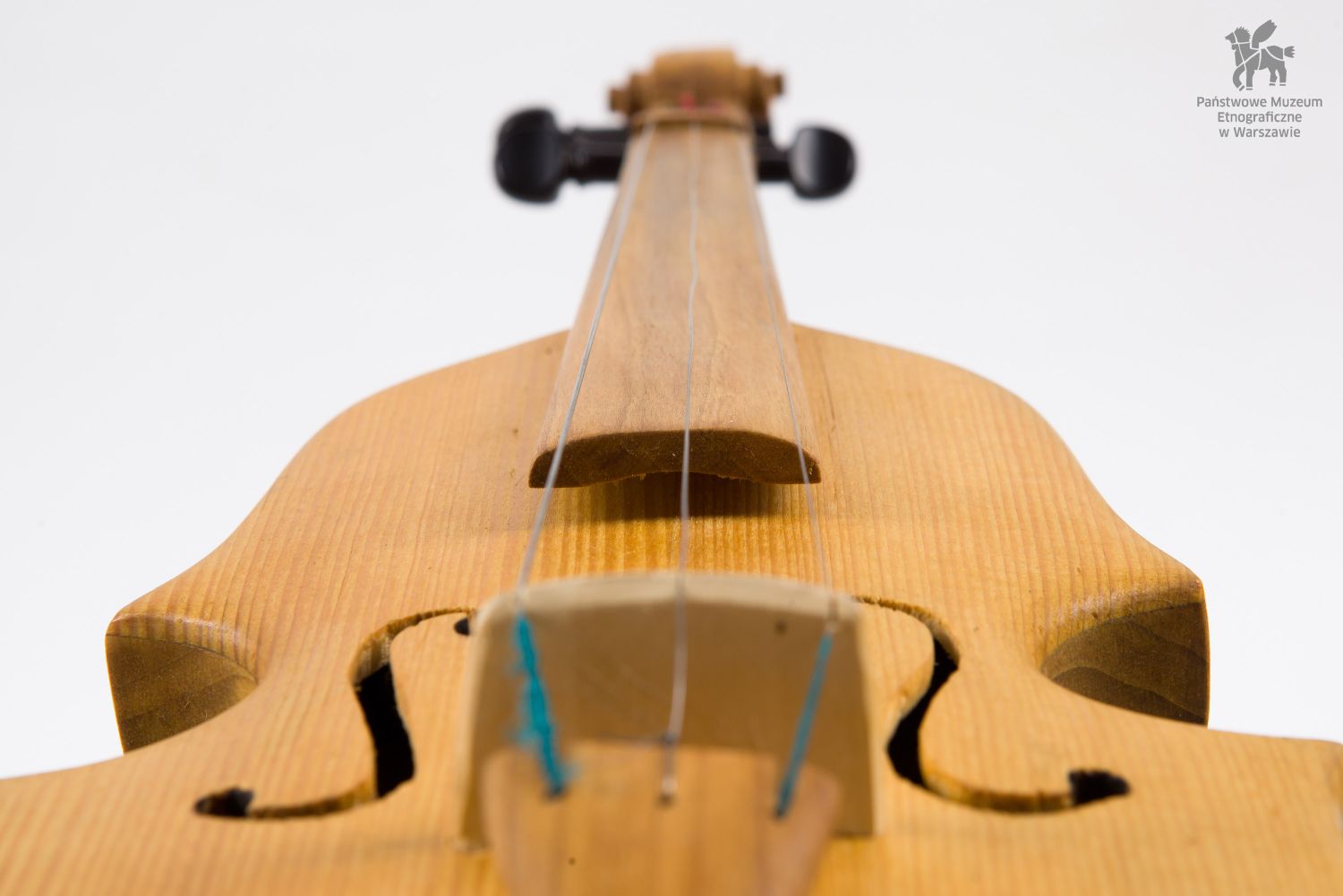 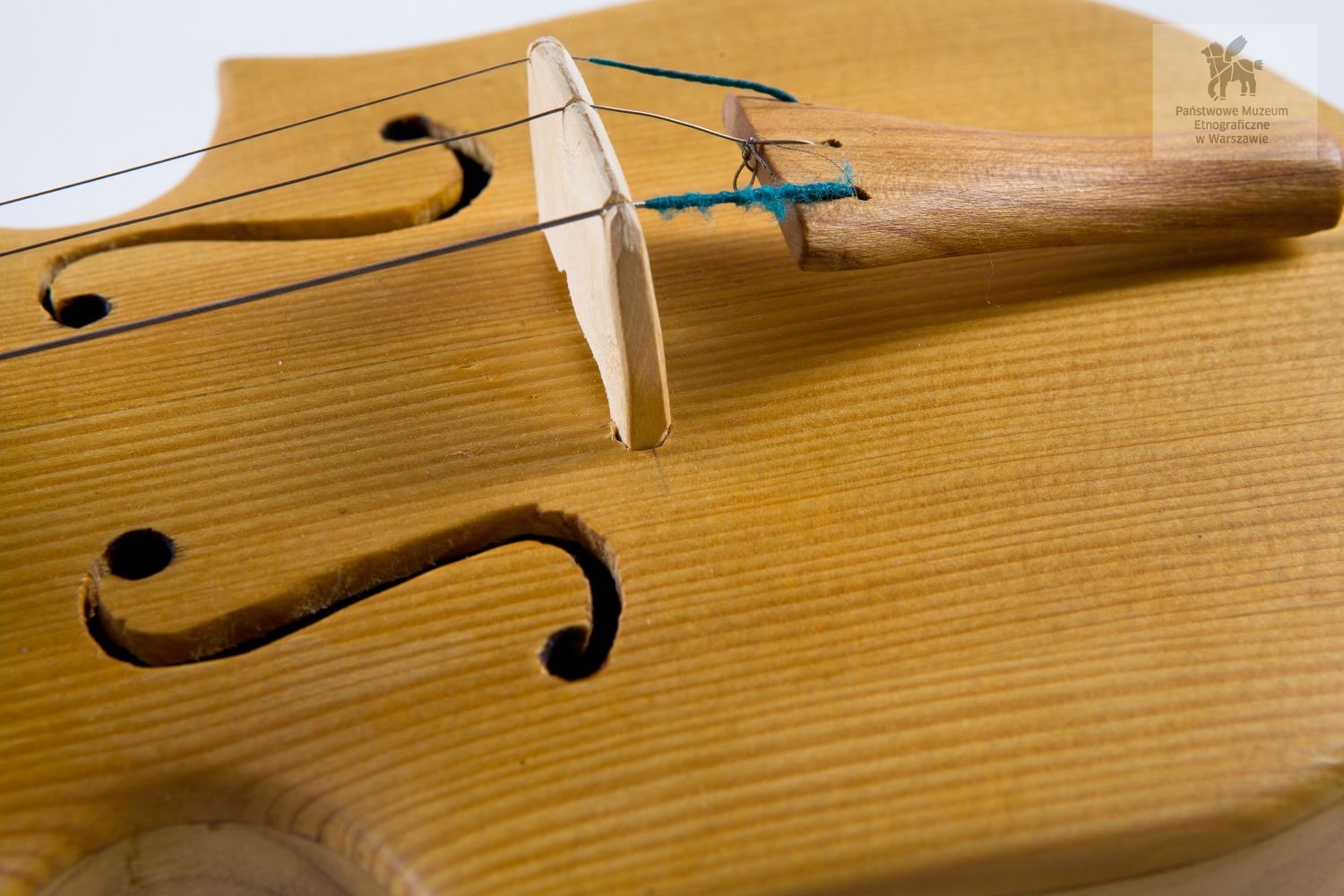 Local name: mazanki
Classification: 3 Chordophones / 32 Composite chordophones / 321 Lutes / 321.3 Handle lutes / 321.32 Necked lutes / 321.322 Necked box lutes or necked guitars / 321.322-71 Necked box lutes or necked guitars sounded by bowing with a bow
Maker: Butryn Zbigniew
Date: 2006
Village / Town: Janów Lubelski
Region: Lubelskie Province
Country: Poland
Owner: The State Ethnographic Museum in Warsaw
Inventory number: PME/10/KZ/1-2
Description: a newer, violinised, form of the mazanki introduced by Tomasz Śliwa and Stanisław Grocholski (with clearly formed four corners, which makes the upper bout in particular markedly wider); back plate, ribs, neck and pegbox carved from one piece of wood; three strings; one of bridge's feet longer, going through an opening in the top plate and resting on the back plate, functioning as a sound post; f-holes without crosswise cuts
Materials: wood, metal
Sound compass, tuning: in 5th (e.g. f' – c'' – g''), adjusted to the black goat's tuning, higher than violin’s one
Performance practice: an instrument with medieval roots; before World War I used during the ritual part of the wedding (wedding feast) together with the wedding bagpipe; after World War II reactivated in the S. Moniuszko Music School in Zbąszyń; now used in the folk revival, too. Kierski (1861): "From the arrival of the guests until the first supper, the violinist uses a small and very high-pitched violin called mazanki, and for the lack of one he ties up an ordinary violin almost in the middle, which makes it emit a shrill sound like the mazanki [he is accompanied by a musician playing a black goat]. For as long as the mazanki is playing, the groom should treat the guests to his vodka and beer and pay for any damage himself. But once the violin starts playing [which is accompanied by the white goat], all the costs for vodka and beer and other unforeseen expenses or damages should be borne by the wedding guests. Until supper, the guests remain in the fine clothes that they wore in the church; thereafter, they cast off their overcoats, don their cloth undercoats, made of navy blue cloth, and the merriment lasts until morning."
Catalog card by: Zbigniew J. Przerembski
Oberek; Edward Rybicki (1908-1983, Stefanowo), mazanki; rec. Warsaw 1949; Sources of Polish Folk Music